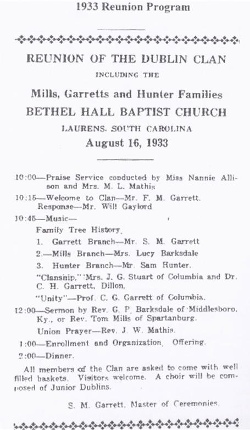 I have only identified two African American families of Garretts  in Laurens County, SC.  Much of what we know about our line was summarized in a biographical note on Casper George (CG) Garrett that appeared in History of the American Negro, South Carolina Edition (A.B. Caldwell Publishing Co, Atlanta, Georgia, 1919). Presumably, CG Garrett was the informant for the information that our Garrett line is descended from an African described as a “prince of the blood royal” who married a slave woman and bought his wife and girl children. Other informants have added that the African was called “Dublin” and that two of his daughters were mothers to children who carried the surnames Garrett and Mills.

CG Garrett Excerpt from History of the American Negro

My award winning article about the slave owners of my great-great-grandfather, Isaac Garrett, provides a summary of the evidence regarding the relationship between CG Garrett and my Garrett Line.

Over the years we have been able to corroborate essential elements of our family “lore,” including a deed of manumission documenting the purchase of his freedom by a slave named Dublin (found in Laurens County property records) and a sale bill evidencing the purchase of a woman named Sally and two girl children (found in probate files of Charles Simmons). Note that a woman by the same name appears in Dublin’s household in the 1850 U.S. census. Cousin David Nicholson, a great-grandson of CG Garrett, discovered the report of a court case that provides evidence that Sally was the mother of the two girls Dublin purchased as well as three other children.

The 1933 Dublin Clan Reunion Program provides evidence of close family ties among the listed families. I have connected with many of our Mills cousins and  several Hunters, in addition to a possible “Dublin” clan that uses that surname.