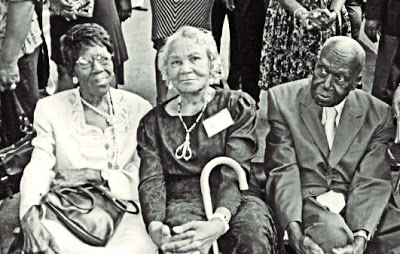 What is your full name?
Flora Lee Sullivan Brown Harris.

When and where were you born?
On March 21, 19 16 I was born in a two story house with six rooms in Laurens County, South Carolina . We lived on a farm with cows, 2 mules, chickens, and potato patches.

Did you have inside utilities?
No, we had no electricity or telephone and we had a well with a long string with a bucket at the end. We had a toilet outdoors behind the barns.

What kind of chores did you have?
I helped Mother cook before I went to school and when I got out of school. I had to help Mama cook and sew. In addition, sometimes I worked in the corn patch, peach grove, potato patch, worked in the garden with Mama, and helped my Mother do canning. I also helped my brothers do their chores…I did a little of everything.

Did you get an allowance for doing your chores?
What is that? No!

Did you have any special friends?
The boys were always after me. Coker was my book toter. He carried my books for me between classes. Everyone would come to me when they needed something, especially when they wanted some of my cooked biscuits.

What Church did you attend as a child?
Daddy always made us go to church. I gave my life to Christ as a young girl at Rocky Creek Baptist Church in Simpsonville , SC.

What games and toys did you play with?
I could not play any games because I had to stay in the books and sing with the family and church. There were nine children and we couldn’t afford any toys. I also had to help Mama cook biscuits and gravy while standing up on a chair.

Where did you go to school and did you like going?
I went to schools in Fountain Inn , SC at Hopewell , then Reedy Fork. Sometime, I was over the children in class and I loved to help teach when the teacher was out sick.

What event had the most impact on you while you were growing up? Did this event impact your family?
When Mother died, Daddy was going to give the boys to Aunt Ida to raise. But, I refused to let them go. I raised them because I wanted us to stay together.

Did you have to work to support the family?
Yes, I worked in Greenville for a Jewish woman. But, after Mother died and Daddy got sick, I had to quit working to take care of my brothers and sisters. Even though my Daddy and Aunt Ida were mad at me, my brothers were very happy that I stayed to take care of them.

Did you have pets?
We had dogs and cats on the farm.

How did you travel?
We were only able to walk to get to places.

Did you get toys for Christmas?
We only received clothes, candy and fruit for gifts because we did not have much money. The boys got firecrackers. However, we would have a special dinner.

Was there someone that influenced your life?
Yes, Aunt Cora was a teacher and she helped me with acting and showed me how to dress like a woman.

What is the name of your parents and siblings?
My parents were the late Cade and Lydia Neely Sullivan
Siblings: first child died, late Cade, then me Flora, late Hattie, late Lee Roy, late Eddie Pearl, Plummer, late Jessie, Hommer.

How did you meet your spouse?
I met Zeno Brown at Mt. Zion He kept following me around. I was scared of the boys in Fountain Inn, SC because they always wanted to kiss me and I didn’t like them because they were so trashy.

What was it like when you were proposed to? When and where did it happen? How did you feel?
He already had a marriage license for us and I did not know anything about it. Then he took me that night to a preacher lady and we got married. Zeno did not know anything but I married him anyway. Then I left that place and went home alone.

He did not know it, but I was already planning to go back to Greenville. I went back to Greenville and he came with me. I worked at the Marchen Cloth Company and did upholstering. Then we started living together with Aunt Corrie until we found an apartment. It was a good marriage.

We have four children, Wallace, Dorothy , Lydia and Larry. I am very proud of all my children. Because I raised them with a strap and switches.

Are you still married?
No, I was a widower for 17 years. I met Clifton Harris who started calling me every night. We had a Church wedding at St. Paul Baptist Church in Greenville , SC. I was walking down the aisle to get married and when I got half way down the aisle my future husband, Clifton came and took me the rest of the way. He did not want me to get away. We moved into a house with no heat.

What was your profession and how did you choose it?
I worked as an upholsterer since I was raised up sewing and I liked to make things beautiful. I could do things better than other girls and they always wanted me to cook biscuits.

What is the one thing you most want people to remember about you?
That I am a Child of GOD and I always helped others. When I taught Sunday School I was willing to learn also. Whatever you do, do it right the first time. I pray before I do something and I always wanted to do what is right. I try to help others to do the right thing. I always do what is right in GOD’S sight. God has given me a healing touch. If someone needs a healing touch and they have faith in GOD; with my touch with prayer and GOD’S Spirit people have been healed.

*Interview conducted by Virginia Chapman
April 6, 2012
Photographed and compiled by the wife of a great-great-grandson of Wister Lee Garrett.