The Many Faces of Slavery: A Book Review

The Many Faces of Slavery. By Alexia Jones Helsley and Patrick McCawley. Published by the South Carolina Department of Archives and History, Columbia, SC; 1999. ISBN 1-88067-52-8, 168 pp. Illustrations, index, photographs. Softcover. Available at varied prices from third party sellers on amazon.com. 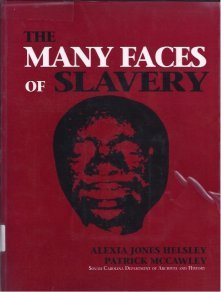 I am always on the lookout for reference works that add to my store of knowledge about antebellum South Carolina. I came across a reference to The Many Faces of Slavery while browsing through the website of the South Carolina Department of Archives and History (SC Archives) (http://scdah.sc.gov: accessed 9 January 2014). Although the book was published by the SC Archives, it was not available on that website. Fortunately I was able to purchase a used copy that had been “discarded” by the Public Library in Spartanburg County, SC.

The Many Faces of Slavery has much to commend it. First, it provides a sampling of the types of documents held by the SC Archives that might yield information about ancestors who were held in slavery. The documents include SC statutes and petitions filed with the legislature relating to subjects such as manumission, slaves and free people of color engaged in commerce, communities of run-away slaves, religion, and crime. In the latter regard, the most surprising record was that of an 1852 criminal proceeding against a slave owner who was hanged for the murder of an eight-year-old slave girl. In stark contrast, an 1843 warrant describes a case in which a slaveholder was charged with interfering with the slave patrols because he and friends threatened violence to protect African Americans. These are just two examples of the way in which this compilation challenges many assumptions some might have about this era of SC history.

The book presents images of 11 original records, most of which are transcribed. In addition to the unique details of the documents, the authors provide background information regarding the historical context, the circumstances that gave rise to each record, and in some cases the aftermath. Two examples highlighted not only the prevalence of miscegenation involving slaveholders and slave women, but also the lengths to which the white men involved in these relationships went to thwart the 1820 SC law that required legislative approval to free a slave. In these cases the slaveholder’s wishes were implemented; however, in a third more poignant case the slave family was dissolved via sales (although that case did not involve acknowledgment of paternity).

Genealogists will appreciate the “every name” index that might point to information about particular surnames, but the true value of this book lies in the “back stories” that make for a nuanced examination of the history of slavery in South Carolina. For the latter reason, The Many Faces of Slavery would be a useful addition to the research library of any family historian who seeks to interpret the lives of individuals in South Carolina during slavery.

Cite this post as: LaBrenda Garrett-Nelson, “A Review of The Many Faces of Slavery,” LaBGarrett Genealogy blog, posted 28 January 2014 (http://labgarrettgeneaolgy.com: accessed [access date]).